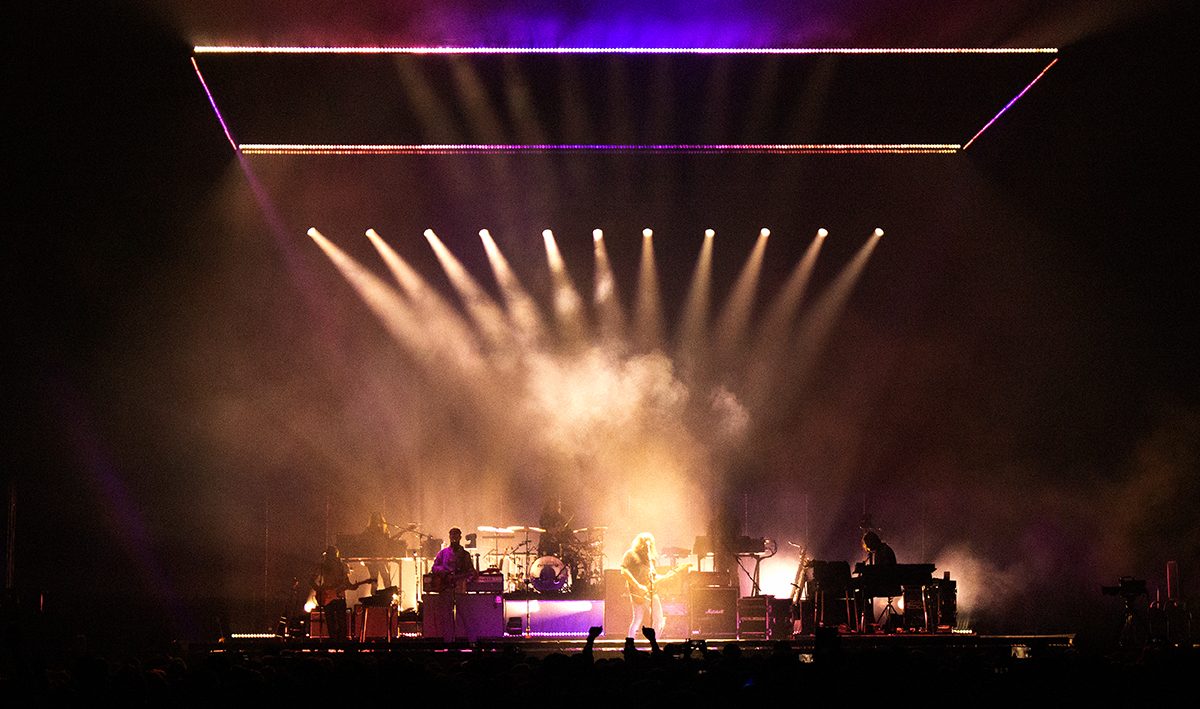 World renowned American rock band, The War on Drugs, have spent the first 4 months of 2022 touring the UK and Europe showcasing their newly released album, I DON’T LIVE HERE ANYMORE.

Production manager Jimmy Russo and Lighting Designer Ben Silverstein, who have both been working with The War on Drugs for several years, enlisted the help of Neg Earth Lights to supply the tour with lighting, rigging, and network and control equipment.

Ben explains, ‘One of the challenges was to design something that would be scalable from 1,000 to 2,000 capacity venues all the way up to the O2 arena’s 20,000 capacity. We constantly needed to go from ‘A-rig,’ to B-rig,’ to Z-rig,’ and back with a system that would be compatible for each. Dave Ridgway and Gavin Maze understood those challenges and really did some backflips to make it happen for us.’

Neg Earth Lights’ Project Manager, Gavin Maze, was the key contact for Jimmy and Ben. Gavin took Ben from vision to reality with our fantastic CAD team providing lighting plots, rigging plots and custom fabrication solutions and welcomed The War on Drugs crew to Neg Earth’s HQ in London for rehearsals in the LH3 Studio, where they could see the rig and lighting fully set up.

‘This project was a perfect example of what Neg do best, all departments working together to make sure Ben got the show he wanted. Having them in our LH3 studio space with our workshops and warehouse team in the same building meant that any tweaks that needed to be made could be done speedily without holding up programming,’ states Gavin.

Ben continues, ‘A huge advantage for us too was using the LH3 production space at Neg Earth to get the whole rig set-up and prepared for all of the various venues we would be performing at whilst on tour. We had all our backline, audio gear and crew at LH3 studio to do a full set up prior to the tour. It was a perfect facility for the team to work and sort out how the production needed to come together.’

The lighting rig featured Ayrton Khamsin-S and Robe Robin Spikie LED WashBeam controlled by a full size GrandMA3 Console and network infrastructure. The simplistic, yet effective staging and lighting layout gave the illusion that the band members were playing in an illuminated cube, the theme and colour changing with each number The War on Drugs played.

Ben highlights how this set up was far from usual, ‘The use of LH3 pre-production was crucial because the design has a full rectangle on the floor and in the air of X4-Bar20s which totally cuts off any stage access. The only way to enter and exit the stage was to step over the lights and the only cable access was through the little gaps in corners. Obviously creating something that has no stage access is not a normal thing to do, but the band and crew was fully supportive and were fine with stepping over lights to access the stage.’

Ben gave a special mention to this, ‘Neg Earth provided us with the most incredible crew who made it happen every day. Mr. Keith, Craig, T.O, and our tour rigger Nippy just did an incredible job everyday without fail. On ‘B-rig’ or ‘Z-rig’ days they were always finding solutions to get the most bang for our buck at each venue.’

Gavin concludes, ‘it was a pleasure to work with Jimmy and Ben once again. Their productions get more ambitious each time they come over and it’s great fun collaborating with them to achieve their vision.’ 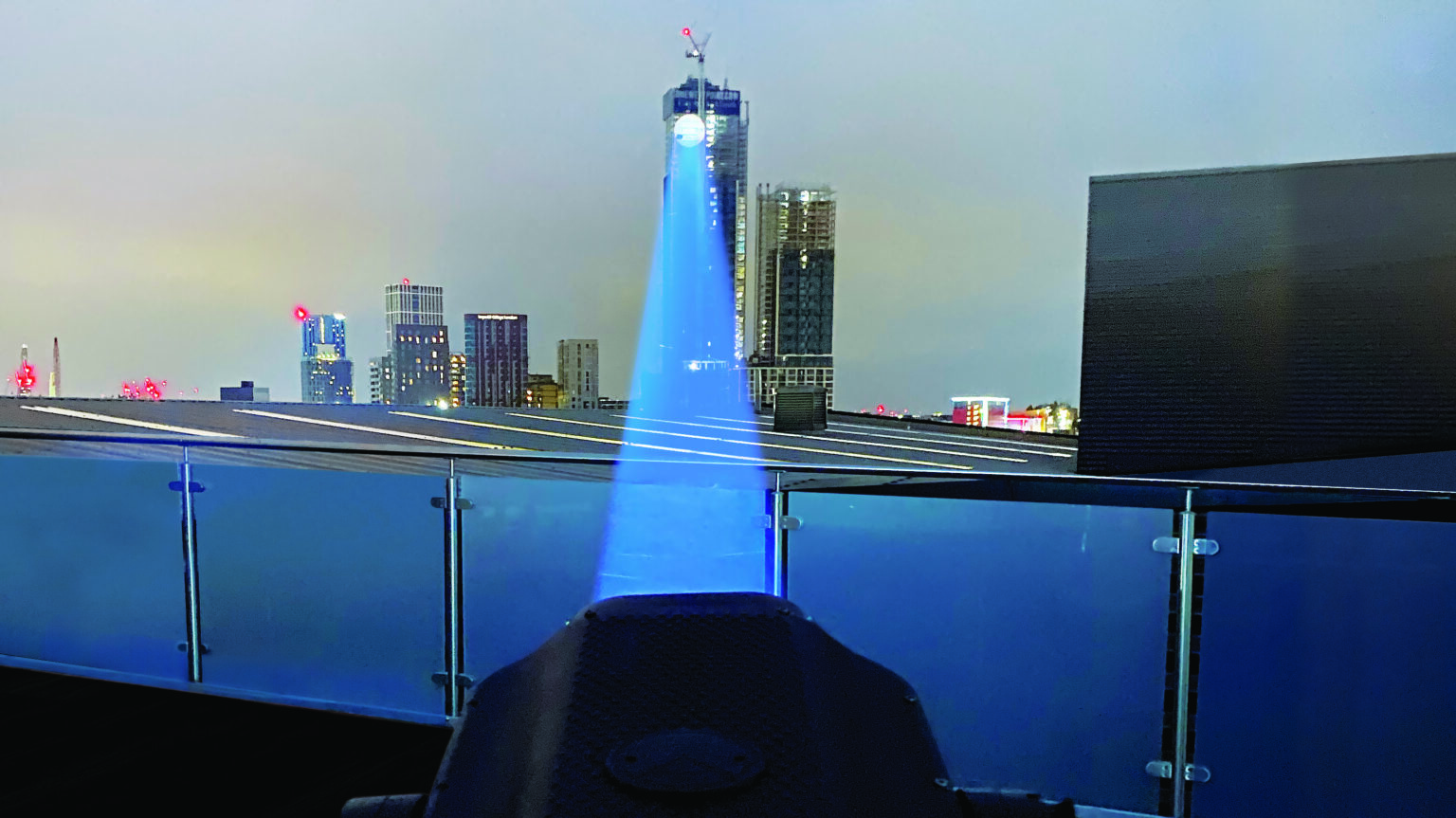 We are excited to announce that we took delivery of 55 out of 115 Ayrton COBRAs this week.

The all-new COBRA pushes all the limits boasting an infinite pan and tilt, 92 gobos’, and an impressive laser source. Planning an event outside? This fixture can do everything inside and out with the luminaire’s simplified waterproofing EasyProtect-65™.

A big thank you to AYRTON and Ambersphere for the seamless delivery.

Ayrton COBRAs are now available for rentals and dry hire.

The legendary band Genesis has reunited for “The Last Domino?” world tour, their first since 2007.

Long-time Creative Director for the band, Patrick Woodroffe, worked with Roland Greil to design the set and lighting for the tour. Genesis core members Phil Collins, Mike Rutherford and Tony Banks kicked off the COVID-delayed tour last September in Birmingham, England then played a US leg in November and December. The open-ended tour continues in March with dates booked in Germany, France, the Netherlands and England.

The lighting design calls for 148 versatile Claypaky Scenius Unico spot, wash and beam lights for the show, which were supplied by Neg Earth Lights.

“As Genesis has a rich history of pushing the envelope in terms of show design, it was important to keep that momentum going for their return to the stage,” says Roland Greil. “For Patrick and myself it was key to create a very versatile and theatrical design, which allows for all kind of different looks. Therefore we designed a stage that can change its look and overall feel for each and every song giving them all a suitable look and feel.

“Over the stage we built five pods, which are fully automated to change the scenery,” he explains. “Each of them holds 16 Claypaky Scenius Unicos and a linear array of LED Neon Flex. Together with Jeremy Lloyd, who did the show’s technical integration and design for Wonderworks, we have designed 2mm high-resolution LED wall panels upstage as a backdrop, which track horizontally and can spin to reveal lights on the back of the walls.

“A decently-sized floor package helps to support the overall look from the floor or create imagery with the emphasis on strong floor lighting and silhouettes,” Greil adds. “The whole lighting system extends into the audience to create an immersive experience for the fans and include the auditorium in the overall look.”

Greil and Woodroffe have found Scenius Unico to be “a proven workhorse” fixture for their shows in the past. “It’s versatile and has a lovely big front lens, which works perfectly for an arena rig,” says Greil. The majority of the Scenius Unico fixtures for Genesis are integrated into the five fully-automated pods over the stage with additional units mounted on two audience trusses and an advance truss.

Greil also acts as the Lighting Director for the tour. Marc Brunkhardt is the Lighting Programmer and Joshua Key the Video Programmer. Sam Pattinson and Giles Maunsell of Treatment Studio did the content design and production.